Last week I went on a bit of a road trip of California, starting with a three day hike through the Sierras. My friend Janet and I had a little experience with odd hikes as kids but it’d been a fair while since we’d done any long treks, especially overnight, so oddly we decided to do a somewhat strenuous 30 mile hike over the course of three days. My dad had recommended it as one of his favourite hikes in the Mammoth area, and he’d mentioned something about hot springs, so we were sold. 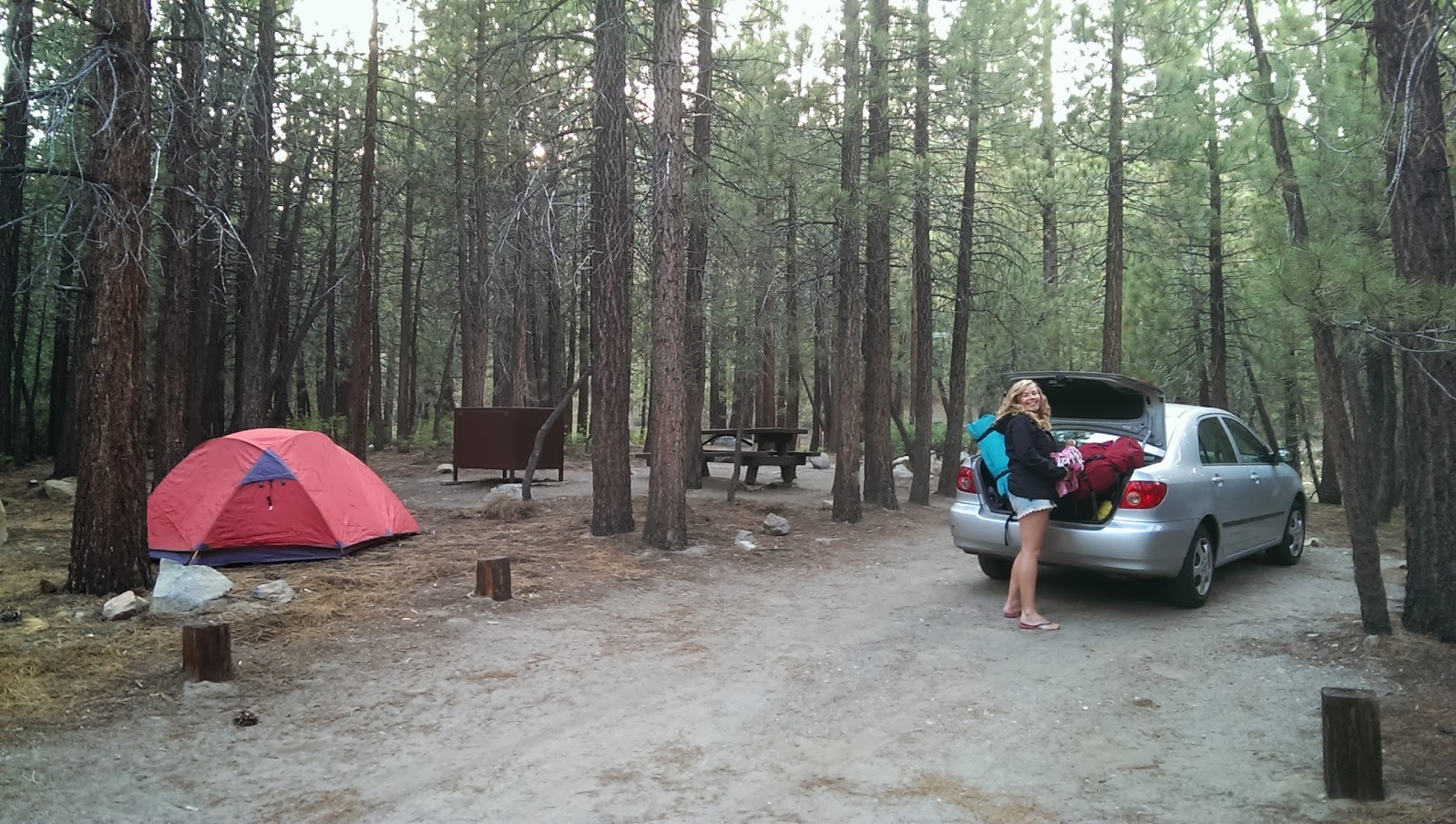 We arrived a little late to get the camping permits on Sunday, so picked up our bear bin from Kitteridge Sports (you now need a bear-proof container when hiking in the Sierras, or you get a $5000 fine and get kicked out, apparently) and tested out our borrowed tent at a little camping spot on the edge of town. Tent worked well, marshmallows were roasted, all in all camping seemed pretty easy so far. Woke up the next morning, failed to sneak out in time before the ranger made us pay the $20 fee, then got our wilderness permits from the odd folks at the station and headed off.

We left the car at the Rainbow Falls parking lot, and started off our hike with a brief detour to see the falls. Apparently every year they recess deeper as the massive water flow etches away at the granite it sits on. And there were the promised rainbows! Tempting to look for a place for a swim but we wanted to be on our way as we had by far most of the hike ahead of us. 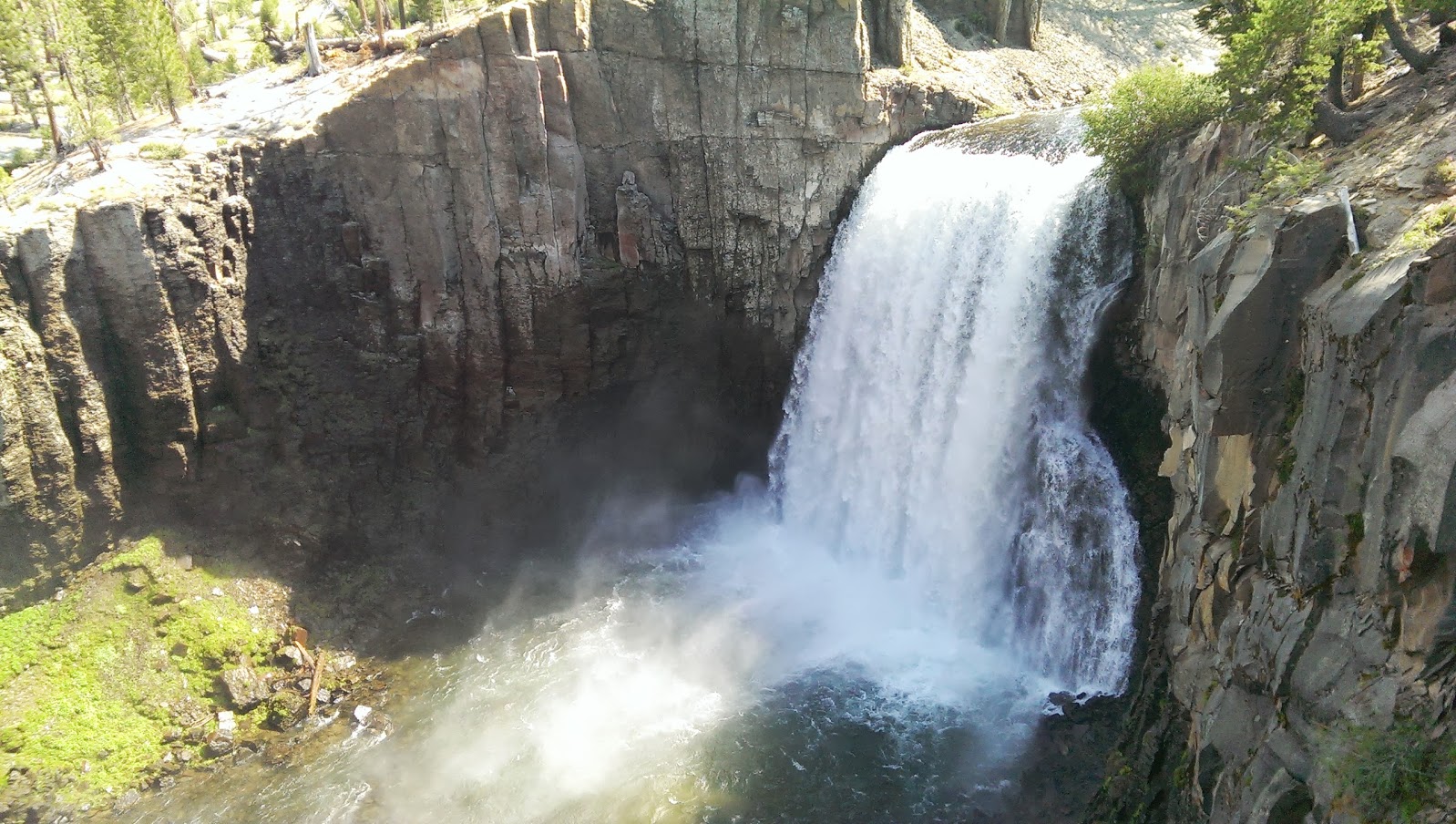 Most of the hike on this first day was, thankfully, a gentle descent - initially with the backside of Mammoth in view, then way down the valley that Rainbow Falls led to. We met a couple campers about a third of the way along that had found a nice spot to set up and make day hikes from, but they hadn’t reached the fabled hot springs. It wasn’t until we turned west that we ran into a group that had left Iva Belle earlier - and it was only a few hours away, they said! Our goal was in sight… until the rain clouds rolled in.

The report had said there was a tiny chance of rain, but apparently it wasn’t our lucky day. Right as we crossed the bridge over Fish Creek, we felt the first spots, and soon we were deluged, trudging along while the water seeped in. I wondered what we’d do if it just rained the entire time - turn around and go back, or just be wet? I tried to check the weather report on my phone but we were well out of reception at that point. After a good hour or so it stopped, and all of a sudden the sun came out! 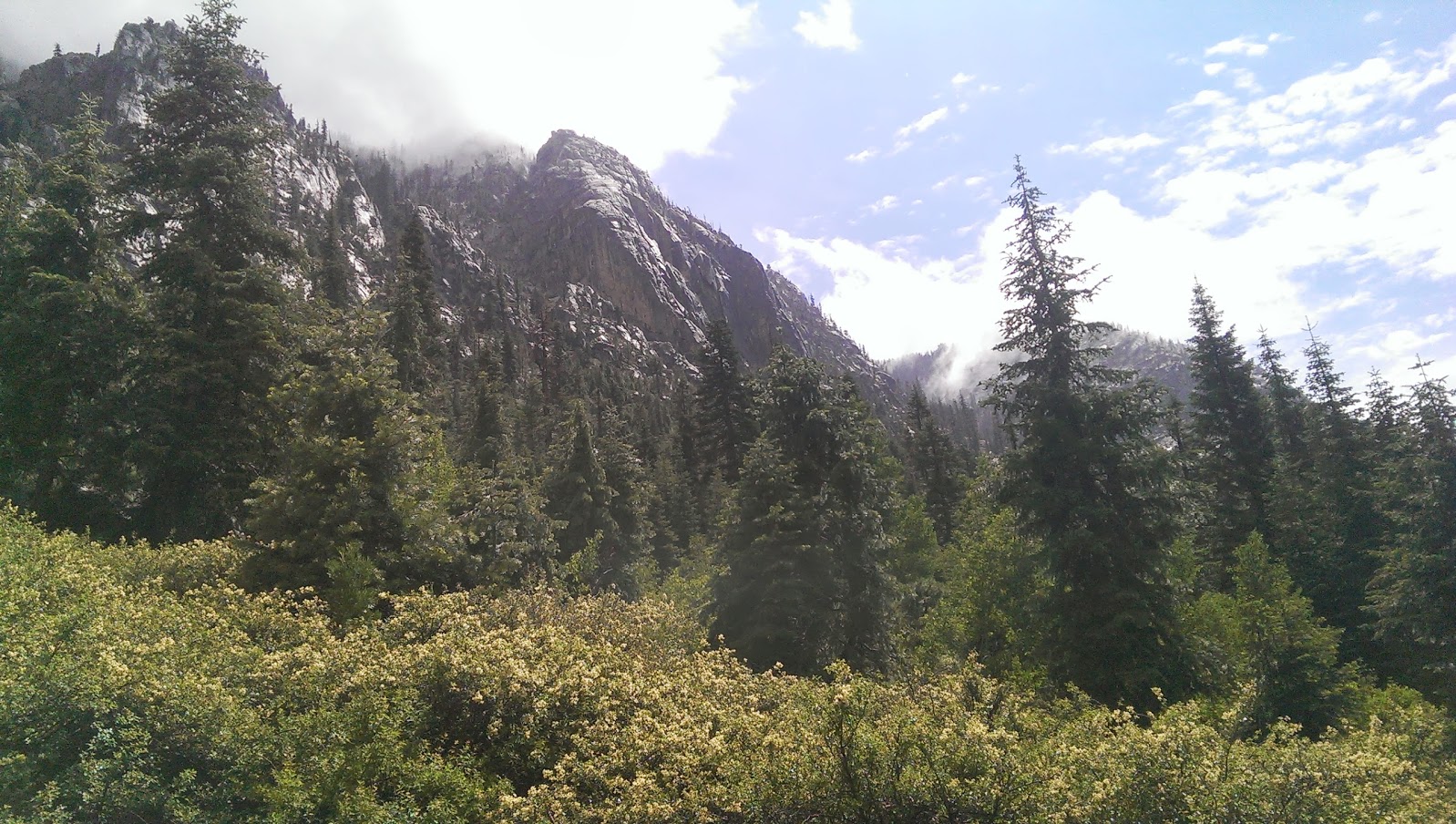 The only feeling better than the sun drying the water right out of your clothes would be finding the campsite. It turns out this was more complicated than we thought. After reaching what seemed to be the end of the trail, we spend a good half an hour traipsing around trying to find the track again, only to give up, sit down, and realise that we were sitting right next to a marvelous hot pool. Apparently we’d been searching for Iva Belle while at Iva Belle… expecting a sign post at least we hadn’t figured out we were already there.

At this point we were well and truly sore from the trek - Janet had blisters all over her feet and our backpacks were awfully heavy. We dried out what we could, then after a dip into the hot pool set about eating all the heaviest food - beans, rice, corn and couscous quesadillas, with leftovers for the next day even, then promptly fell asleep before the sky even went dark.

A tip if you take the trek: Iva Belle is actually three small separate campsites about 50m from each other, all in a large green meadow that goes up the side of the hill. You’ll know you’re near because the streams of water everywhere will be warm! The third campsite is probably the nicest, with one of the pools directly beside it, and another a stone’s throw away downstream. Apparently there are more pools up the side of the hill, but we didn’t find any.

We woke up early to watch the sunrise from the hot pools, then packed up after a quick breakfast and headed off - after spending another half an hour trying to figure out where the track went, that is. (Hint: Backtrack past the entrance to the meadow, before the first campsite, and head up the hill.) Up and over the ridge line gave us a good taste of the uphill that was to come later. Until then, we followed the track along Fish Creek, commenting all the way at how impressive the quality of the track was. The first day it had been almost carved out of granite, it had seemed, and was sided with rocks most of the time. Here and there it had stairs made out of stones, or giant logs that had fallen across the path that had been chopped away at both sides, and we wondered aloud at the amount of work put into it. 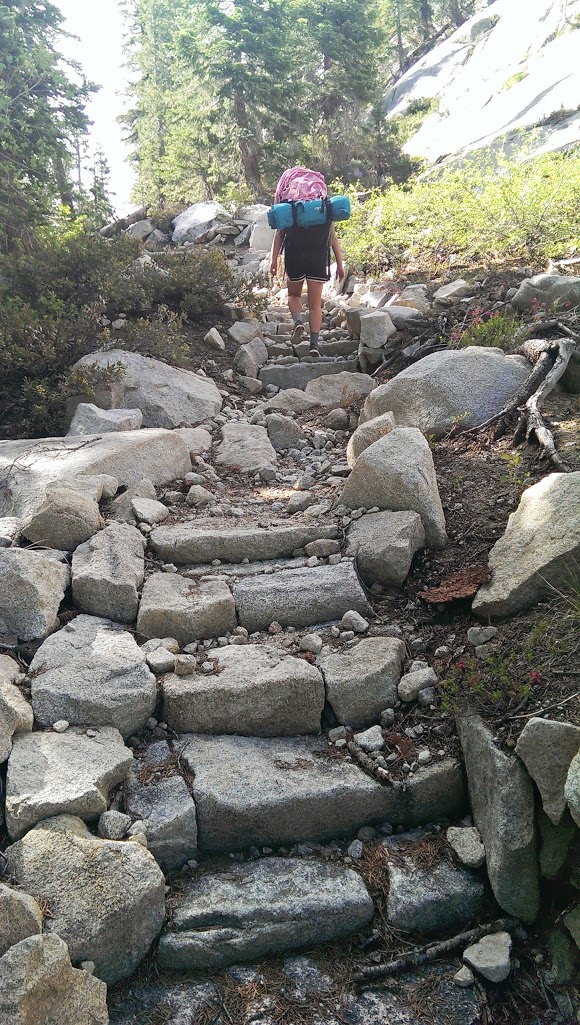 If only similar attention had been paid to sign posting. That would have saved us an awful lot of time finding Iva Belle, and would have prevented us from getting lost the second day. Another good half hour or more was spent trying to find the track which had somehow faded. We spent time returning to the last point where the track was, only to realise that even there the track was more of a depression in the ground. How far had we gone? Our map said we were supposed to cross the river at some point but we couldn’t figure out where. After a bit of debate we decided to make our own crossing, with a luckily placed tree that had fallen across the river to form a natural bridge. We crossed it safely … only to find the trail, as obvious as ever, on the other side. No idea where we missed it but it sure felt good to be on it again!

After a good few hours of following along side the river (and a few stops along the way for very brief dips in the snow-melt-supplied water) we left it to go up the hill towards Purple Lake. We gained about a kilometer of altitude while the trail zig-zagged up the hill, and it was fairly slow going. Thankfully there were regularly streams of water to refill our filter and our water bottles, and we finally experienced the excitement of climbing the last ridge to the beautiful Purple Lake - and we ran into people again coming along the John Muir Trail we just intercepted!

Turns out the John Muir Trail is a part of the Pacific Crest Trail, which runs from Mexico to Canada. Every year, hundreds of people walk the entire thing, and we chatted with two guys who were at the front. One had discovered his last food cache had been bad so we gave him a bunch of ours, which he wolfed down immediately. They travelled very lightly, though were constantly hungry they said. I thought we could have learned a lot from them. 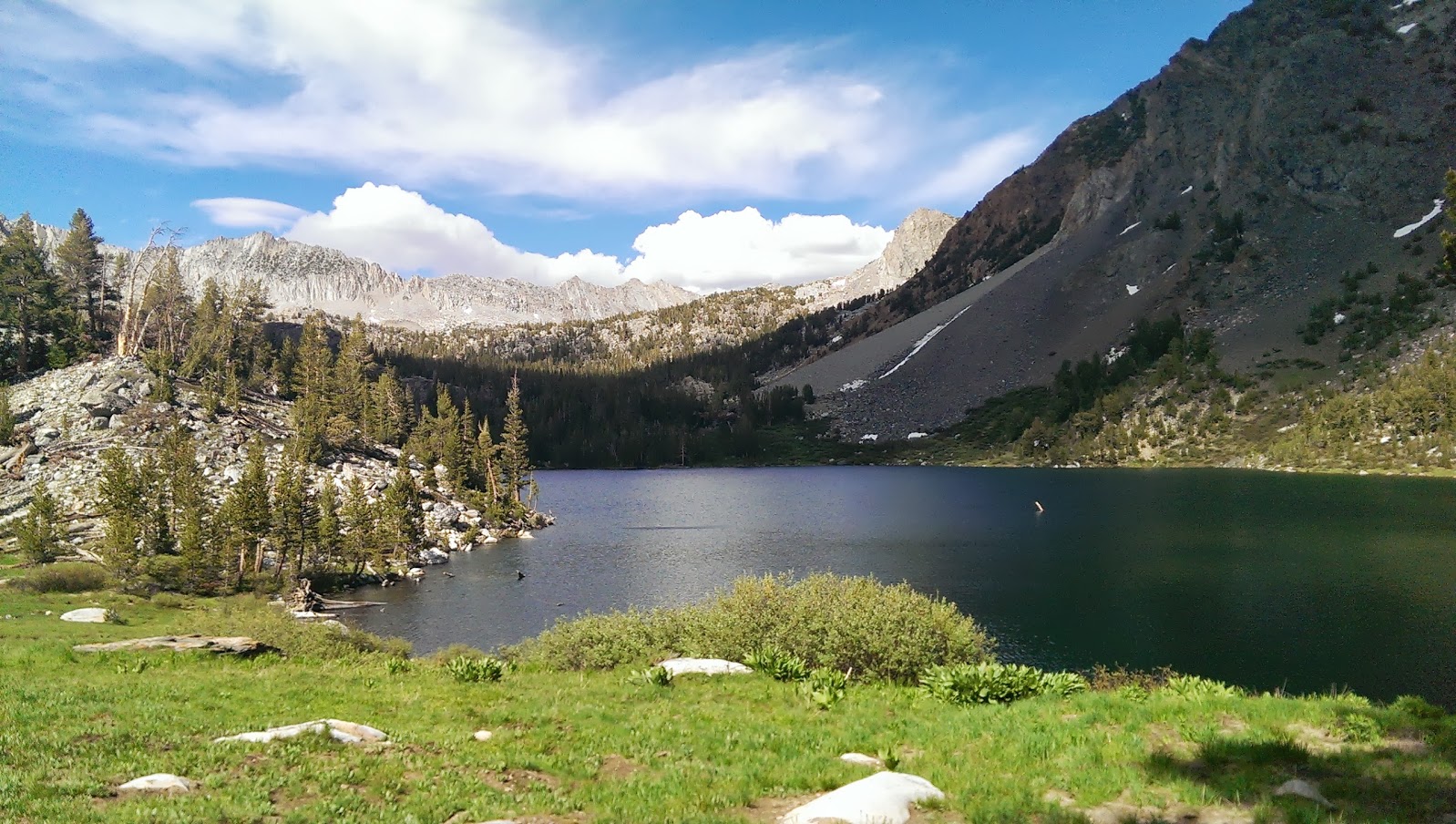 Another hour north and we reached our destination for the night - Duck Lake, at about 10,500′ elevation, and about as cold as all the snow around. We found a sheltered spot from the wind and immediately set up our tent, pulled out our sleeping bags, and heated up some ramen noodles for dinner. Luckily the wind never got too strong but boy was it cold.

We woke up from deep within our sleeping bags to a beautiful view of the lake right outside our tent door. Packing up happened quickly after breakfast as we were keen to warm up on the trail again. 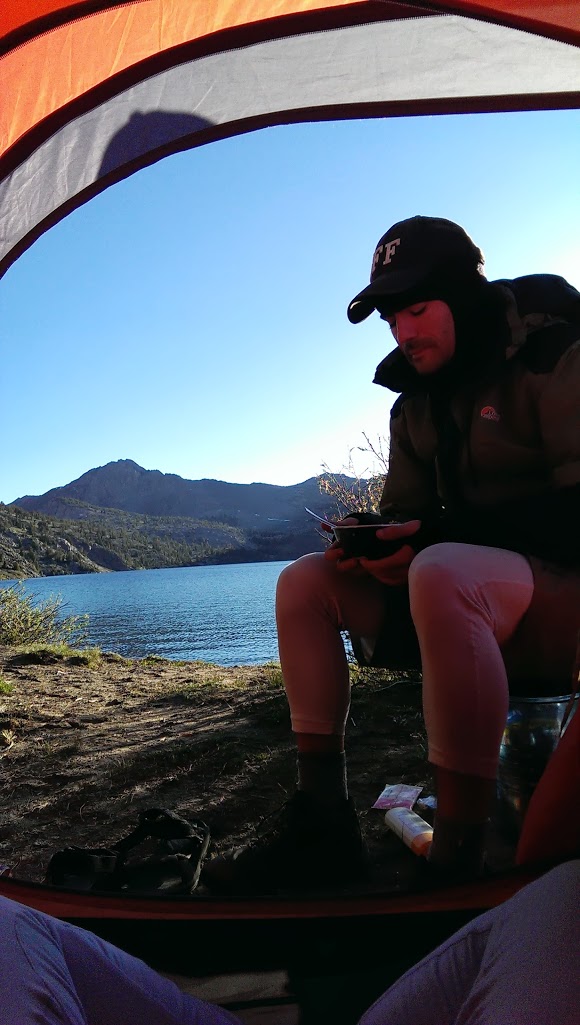 We almost immediately met more people hiking the Pacific Crest Trail, or PCTers as they called themselves. It certainly puts your aching legs and groaned complaints in perspective when you ask ‘So where are you guys headed?’ and the answer is ‘Canada.’ Some of these guys walked further in a day than we did on our entire trip.

The third day was a great review of the trip, passing far above some of the locations we’d trekked across the days before. As we wound our way back towards Mammoth, Fish Creek disappeared and was replaced by the burned section near Rainbow Falls. Despite the near-constant downhill, this was probably the hardest part of the hike in that paradoxical way: Knowing the end is so close makes it seem that much further away, and the final two hours seemed to stretch out forever. 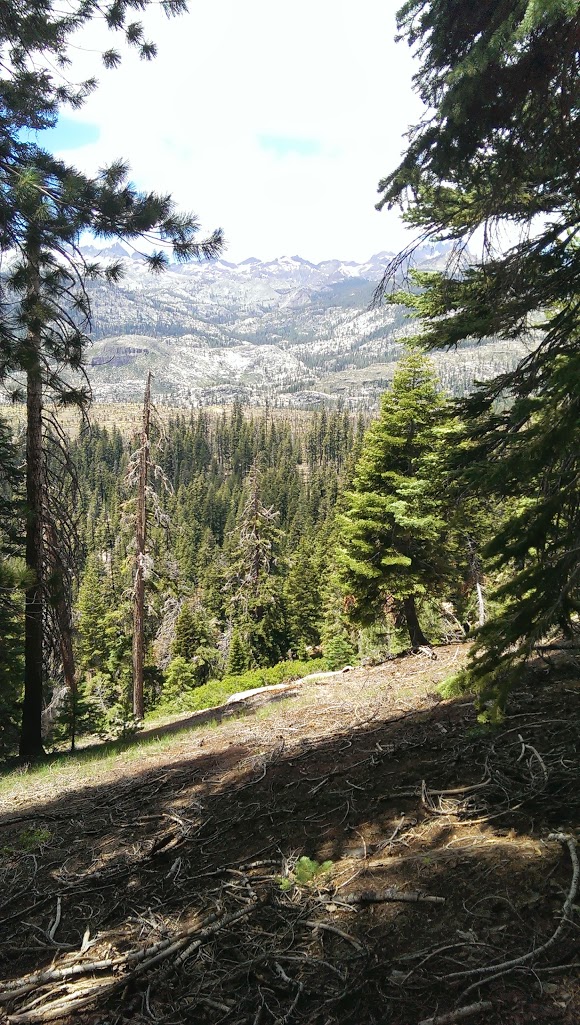 We made it back in record time, walking the 18km in about 5 hours, ecstatic and exhausted. We picked up a few PCT hitchhikers who were looking to get a ride into Mammoth, then ate a big lunch and found a friend with a jacuzzi to visit. Definitely a recommended way to finish such a hike.