In 2005-ish I went through a serious Dance Dance Revolution phase. My girlfriend, my two cousins, and I had a setup where we progressed through increasingly more expensive pads as we wore out the last ones, hooked up to a computer with a thousand or so songs, connected to an old TV. Many late nights were spent with high pitched J-pop blasting out the playroom windows (had to be open; it gets bloody hot playing just a few songs). 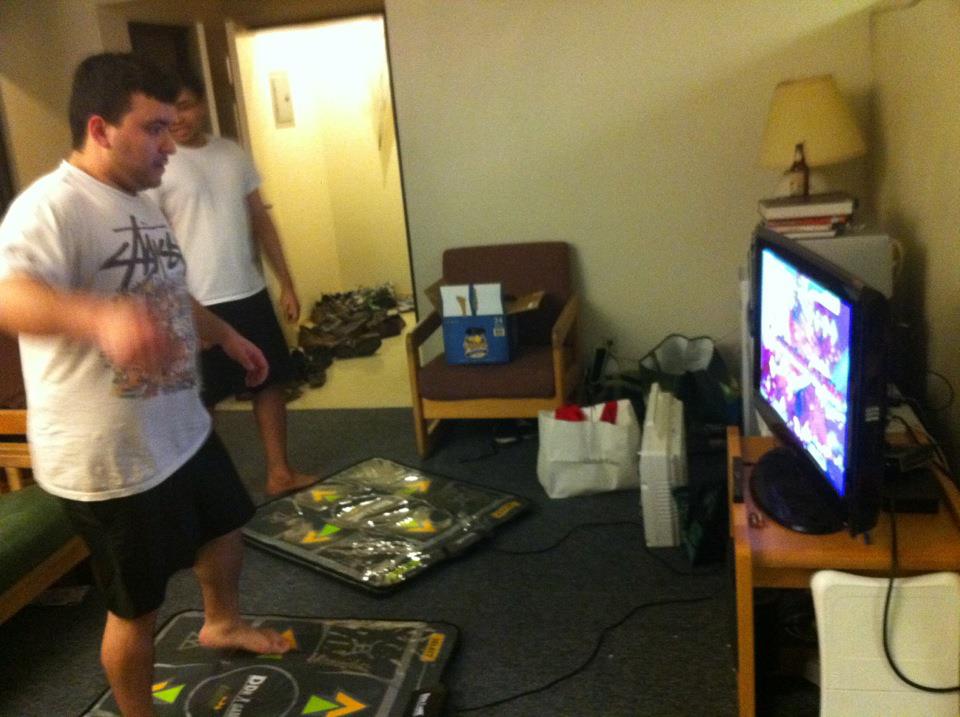 We eventually wore through the RedOctane pads we had, and ran out of enthusiasm, and I thought that was it for me and DDR, save the odd run in with an arcade machine at a movie theater. But this quarter I discovered one of my flatmates and another friend were big fans, and somehow all abruptly we ended up with a very similar setup to the one I danced on seven years ago, and I feel the draw again. (Yes, I use the term ‘dance’ loosely.) The physicality and rhythm of DDR is hard to beat, I think.

Video games are great at presenting a sequence of actions and having players repeat them until they are muscle memory. Any Starcraft player, mid-battle elsewhere, can tap out a flurry of keystrokes to queue up more units without even thinking about it, just like a Counter-Strike player will crouch-jump-turn 180 degrees faster as easy as blinking. DDR, with its simple input (arrows scrolling) and large physical movements required (jumping on squares), is the perfect bed for this kind of motor learning and memory association.

It reminds me of my first computer, which had some Pacman knockoff. I remember when I finally became able to move around without looking back at the keys. DDR for new players has the same effect: Initially, a ‘left’ arrow appears up, and the player has to consciously think: left arrow, use my left foot, wait for the arrow to reach the top, now tap the left pad. Soon (sooner than you’d think!) this is filed away as just: Left arrow appears, tap the left pad on the beat. Next doubles must be learned (two arrows at once), and within that diagonal doubles (up/left or down/right, for example, rather than up/down or left/right). Each initially requires conscious recognition, preparation, and processing of a task, but soon becomes refined to just the recognition and response.

The difference between being in the zone and just letting your legs do their thing and slipping up and having to focus on where they need to go next is very tangible, and very satisfying when you can match a difficult song.

For anyone interested in playing, here’s what you need for a pretty nice setup: