I can’t really remember where I came upon it, but somehow I ended up with a pretty fascinating iPhone app called Chromatic Vision Simulator. It’s a very simple app that utilises the camera - point it at something colourful, select a variety of colourblindness, and you’ll see the colour-limited version on screen. It does it job without any fuss and even features a few nice side-by-side comparisons. 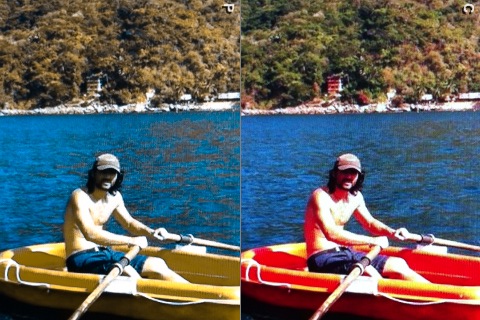 The image above, a screen grab from the program, shows true colour on the right and protanope vision on the left, which is what I have - commonly known as red/green colourblind. The two images look pretty much identical to me, though if I toggle between the other two types of colourblindness I can see a large difference, especially tritanope which looks just about black and white.

Anyway, the app hasn’t really helped me figure out what I’ve been missing out on, which people often ask me about (it’s impossible for me to know!) but it does allow easy insight for others into what I see. I feel like there must be other ways technology can ease understanding between people.