My sister Naomi just reached the end of her six month sailing trip. After much searching, she bought a Columbia 23 with trailer for a couple grand and spent a summer preparing her. In October she crossed the border and put Medusa in the water at the top of the Sea of Cortez, and set off down the western coast of Central America, meandering down on her own or with whatever crew she could scavenge until reaching El Salvador before the hurricane season began. 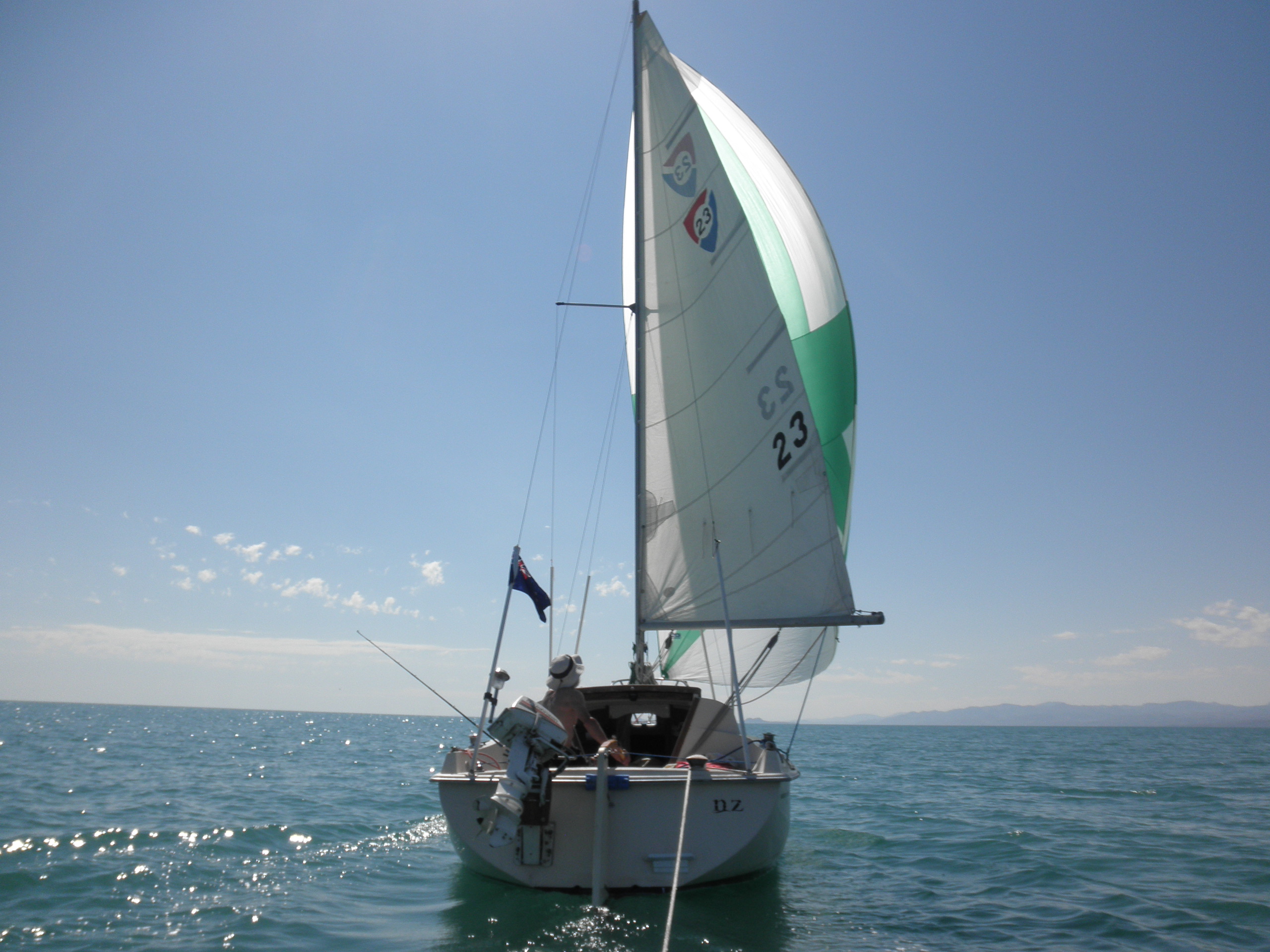 I was lucky enough to crew for Naomi over Christmas break. It’d been a good fifteen years since either of us had spent any considerable time on a boat, and Naomi’s laid-back attitude to a lot of things had me wondering if she’d still be afloat by the time I got to meet her in Mazatlan. Turns out my fears weren’t too far off the mark, as the day before I arrived, immediately after setting off from the southern tip of Baja for the two day trip to Mazatlan, Medusa’s rudder fell off.

As well as strengthening my second thoughts about Medusa’s seaworthiness, this left me in a strange country with nothing but my charades skills to communicate with. As it turns out, I’m pretty terrible at charades, but I still somehow managed to do a lot of walking, taxiing, bussing, and ferrying until I ended up in the same part of the country as Naomi, who thankfully speaks Spanish fluently. Apparently she doesn’t look like it though, as locals who we spoke to would regularly speak directly to me while I just blankly stared at Naomi until they got the idea and would talk to her instead.

It’s surprising how different a place Mexico feels like. I think this is a reflection of the cultural values. Mexicans have a love affair with religion, like the US, but it’s treated differently: instead of being a divisive social or political force, it’s like a culture-permeating presence that you can lean on rather than one that leaning on you. People tell me how they’ve heard New Zealand is a very friendly place to visit but Mexico seems even more so, at least as far as my mono-lingual self could tell. Maybe my favourite aspect of Mexico’s value system is actually something missing from what I see north of the border: no obsession with safety. Mexicans seem to have a relaxed attitude to everything (including being on time) but especially to danger: it’s no surprise to see kids roaming the streets on their own, families riding in the back of trucks or sharing motorcycles (I saw a dad and three kids on a scooter once). The right balance probably lies somewhere between American paranoid parents who never let their kids out of their sight and Mexican ones that put them in the passenger seat of a motorbike without a helmet, but I feel like we could do to move a bit in Mexico’s direction.

Living on Medusa was an exercise in minimalism. The boat could sleep three people and no more (we also had our friend Brad as crew), and that assumed you shared a bed with your belongings. A solar powered battery ran a single light and a USB charger for music (our one luxury), we had a camping-style gas cooker, and there was zero plumbing whatsoever. It’s a bit like camping, every single day - eventually you get used to it but no matter what it’s always going to be difficult to shit off the stern of a boat under heavy weather. You also have to wash the dishes with seawater out of a bucket and sleep in a damp bed every night and wake up at odd hours for your turn on watch so it really helps if you have low standards for living like I do. 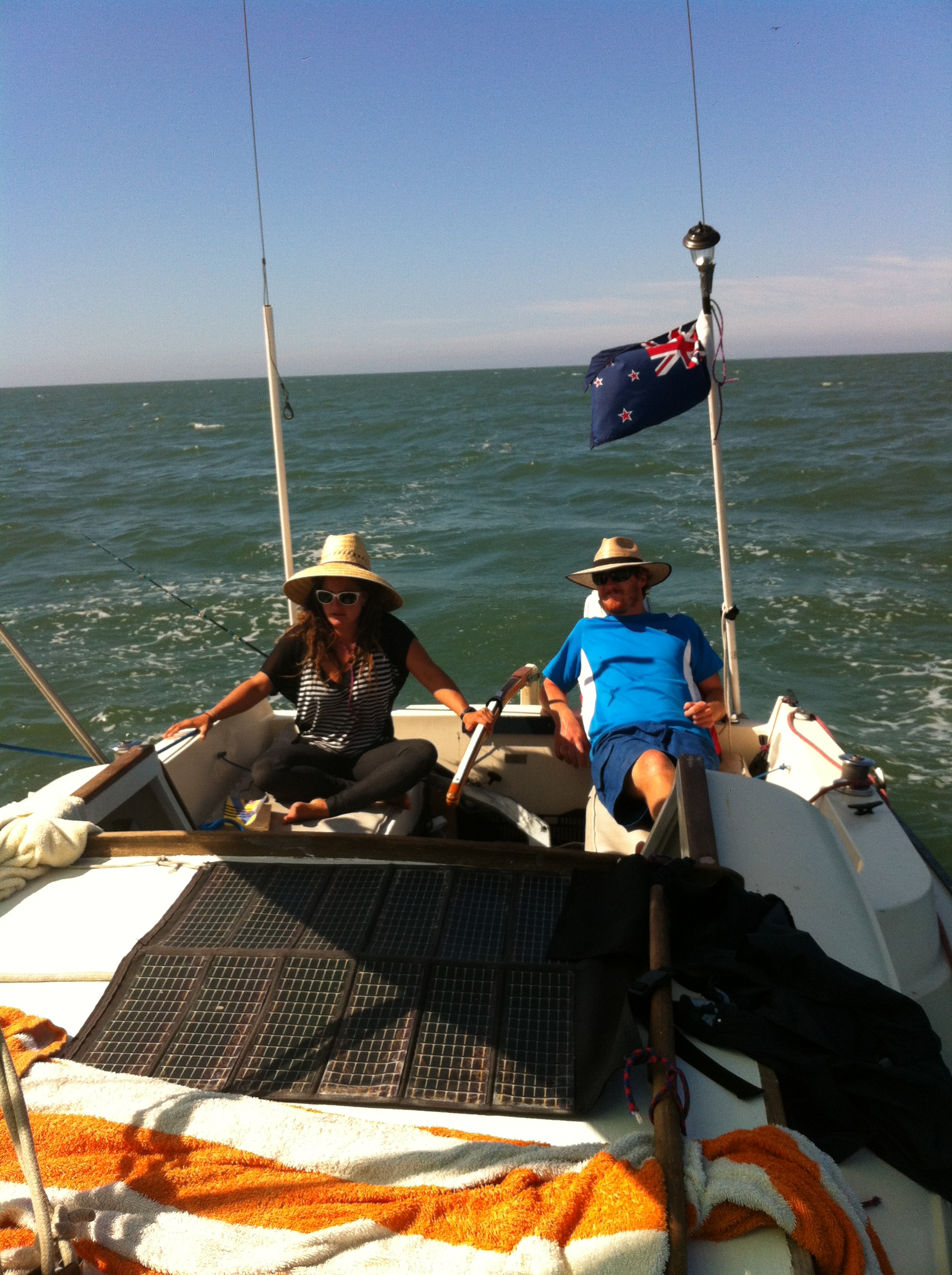 That said, if you can handle living so simply, cruising will have you mostly relaxed and a little bit worried, all at once. I read more books in the three weeks I crewed than I had in the last five years, and we’d spend entire days doing nothing but diving off the side every once in a while to cool off. A busy day would be one where you’d row ashore to eat tacos and use the internet. Then you’d have those odd times where the motor breaks down and the wind has died or the aforementioned rudder falling off, and it’s not like something that breaks in your house and you ignore it for a while and then eventually try to fix it and finally give up and call a guy that knows what he’s doing. On Medusa the worst case scenario is really, really bad, like Titanic bad, or at least Castaway bad. Mostly I just hoped Naomi knew what she was doing, which considering she’s made it to El Salvador is probably right or she’s just really good at faking it. 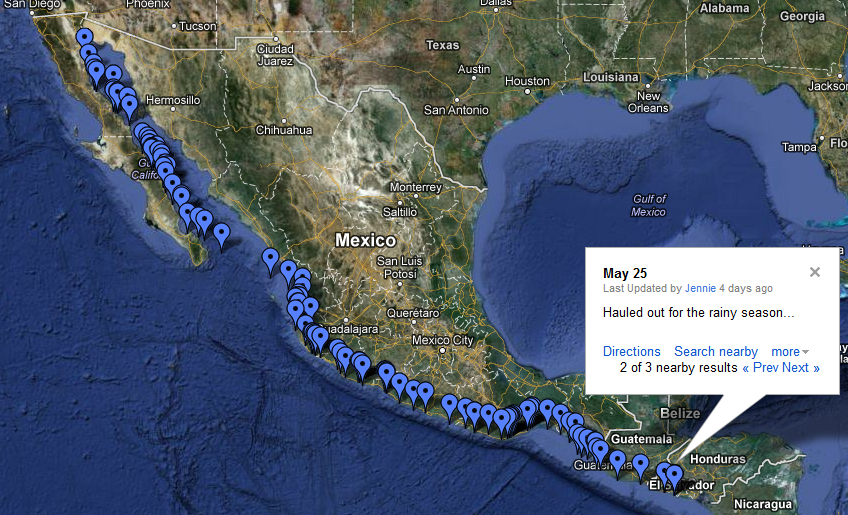 After taking the boat out of the water, Naomi’s going to do a bit of boat work, then head back up to the US to earn enough money to support another leg of her trip, once the hurricane season is over. You can read her blog about her travels, or view the GPS-log of her trip.